Last year, Vandermarliere Family of Cigars—the owner of J. Cortès and Oliva Cigar Co.—purchased the rights to the Cuba Aliados, Puros Indios and Roly trademarks, three Honduran brands made popular by the late Rolando Reyes Sr. While those brands were once popular names in the cigar business, they had fallen into near dormancy in modern times.

Now, the Cuba Aliados brand is returning, though the cigars aren’t being made by Oliva Cigar Co. Instead, it will be relaunched with two distinct lines, one of which is a regular production being made Julio Eiroa of JRE Tobacco Co. while Ernesto Perez-Carrillo Jr. of E.P. Carrillo will make the other, which will be a limited edition release. The decision to release the two blends are being done as a nod to Reyes’ travels after leaving Cuba in 1970 as he sought to find soil and growing conditions similar to his homeland, a journey that led him to Honduras in 1990. 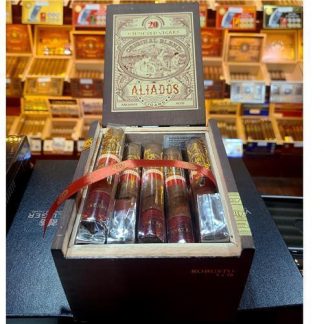 Get 10% Off and Free Shipping when you buy any Full Box of Cigars Use Code : 10OFFBOX at Checkout Dismiss